I love a good story when it comes to whisky. Entering Jan Beek, formerly known from his work at Van Wees, the Dutch independent bottler of The Ultimate series. He began his own brand last year: BEEK spirits, with a large focus on quality and craftsmanship.

He works closely together with Patrick Zuidam, the owner of the distillery that makes Millstone. If you don’t know Millstone, be sure to check it out.

This particular bottle is a rather special one. Firstly, it is a triple distilled Millstone, which hasn’t been bottled before. Secondly, it’s only 3 years old and darn delicious, but maybe the story behind it makes it even better. Jan wrote it down himself, I’ll summarize it for you:

When Jan went to Zuidam Distillers to talk about a new batch of gin, he asked Patrick for a cask of whisky. That’s a bit of a difficulty there, because the warehouse is bursting at the seams. So finding a suitable cask would make a hell of a job. But with great persistency, Jan managed to convince Patrick and they went through the warehouse. Firstly they found a Oloroso cask of which they both thought it was still too young to bottle.

But then Jan pointed at a lonely cask a bit further down the warehouse, which looked very old. It turned out to be a 70 year old Pedro Ximenez sherrybutt (500 liters) which they disassembled, cut off some pieces and they made it a 250 liters hogshead. So: a 70 year old first fill PX hogshead. “That’s a PX cask Jan, I’m definitely not going to sell that one”, however, Jan managed to get to taste it. And when they both did, they looked at each other and knew it: “Wow”.

You can imagine the discussion between the gentlemen that followed afterwards, but now we all know how it turned out. The triple distilled Vintage Beek Millstone 2014 is 3 years old and bottled at 47.8% ABV. The outturn was 349 bottles. Let’s taste this piece of art:

Full, heavy, and juicy. It’s very dark and fruity, almost like Ruby Port, sweet spices taking over, before drying into the finish. The triple distillation makes it fruitier and less heavy than for example a regular Millstone of this age.

“Wow” definitely was the right way to describe this. 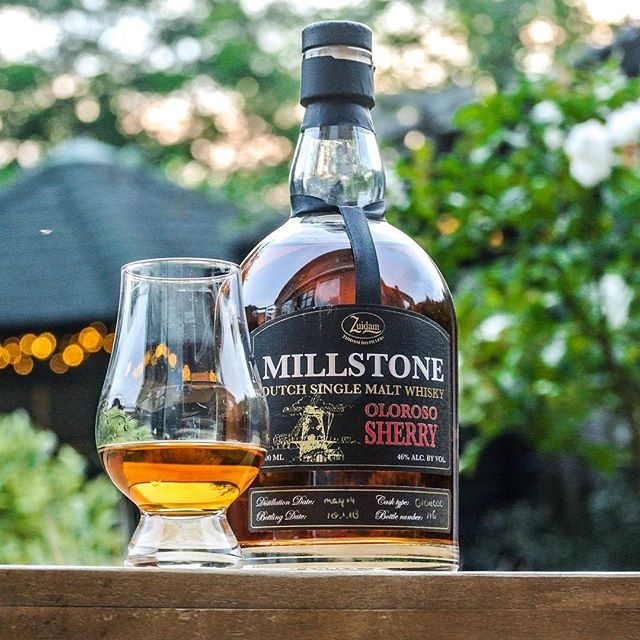